The Road to Badwater Part 10: Lone Pine to Whitney Portal

Lone Pine to Whitney Portal (122 – 135) - Hardest race finish EVER
From Lone Pine to the finish, once again you are only allowed one support vehicle. My crew parked our 2nd support vehicle and everyone piled in the van as we headed for the Alabama Hills, which are famous for all the movies that have been shot there. http://en.wikipedia.org/wiki/Alabama_Hills 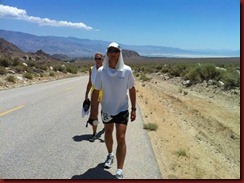 Photo: Nanc giving her support through the Alabama Hills
About one mile into this section I decided to change my socks and shoes. They were both soaked and mentally I felt switching to dry shoes for the climb would be helpful. My feet looked pretty rough since they had been wet for most of the race and since both my big toe nails were broken free (I would end up pulling both a few days after the race, I think I should have gone with shoes ½ size larger). At least I didn’t have any blisters between my toes; my Injinji socks were doing their job. I put my Asics back on that I had worn for the first 80 miles (had changed my socks and shoes for the first time back then). They were dried like a piece of leather now and it took me a painful mile to break them back in.

During this section I wanted to make sure that I spent time with all my crew who weren’t pacing me; Janet, Nanc and Dave all hiked with me as we went through the Alabama Hills, and it was a joy spending time with them as they had supported me through the entire event. By the time we reached the base of Whitney Portal Gord had pushed through his sickness and was ready to go. I can’t think of anyone else I would have wanted by my side during this battle or any battle for that matter. He kept a non-stop wave of encouragement going when I needed it most. We each had a red bull and continued to the top as the rest of my crew patiently waited knowing my biggest concern at this point was that we didn’t accidentally disqualify ourselves in the last few miles. 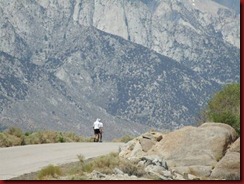 Photo: One more time into the breach, with Gord giving me support
As we neared the Whitney Portal camping area Janet in her excitement told me that the finish is right around the next bend and that I needed to push it in. The crew drove up to the next bend and Janet soon realized her error, we were still 1.5 miles from the finish. She insisted they return and let me know. When the crew arrived she began apologizing profusely for giving me the wrong information. She knew that I was completely exhausted. I accepted her apology, but was so focused on moving forward and us not being disqualified by having two pacers that I told her to get in the van. This was the only time I had snapped at my crew and it was my lowest point during the race.

The last mile seemed endless, as I knew I was close, but still couldn’t see the finish. Finally it was there. My crew joined me for the run across the finish line holding the sign Janet and Nanc had made “I fought the fight, I finished the race, I kept the faith” – 2 Tim 4:7. It will be my most memorable finish ever, I knelt thanked God, then stood called in my crew and thanked God for them and protecting all of us. 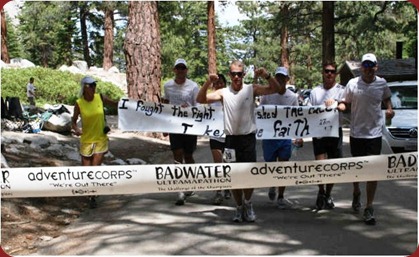 RD Chris Kostman interviewed me and gave me belt buckle. (If you have to ask why do this for a belt buckle, you probably won’t ever understand). Afterwards I sat down in a chair and passed out from exhaustion. My adrenaline was spent; I had given everything I had.