The Road to Badwater-Pt 9 The Looooong Section

100 mile to Lone Pine (100 – 122) The loooooooonnnngggg section
Cal was my primary pacer for much of the run to Lone Pine. He continued to keep up a constant chatter as he was still working off the Red Bulls. We watched as the sun came across the desert and felt the temperatures rise again. The day before the race someone had told me this was a rough section, you’ve just completed 100 miles and now you need to run a marathon to Lone Pine, which you can see the entire time, but somehow just can’t reach. Well he was right; it seemed like no matter how much we ran we still weren’t reaching Lone Pine. Mike did his share of the pacing during this long section and Gord, now feeling better, even was able to come back and pace a few miles. 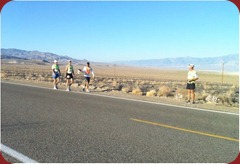 Photo: Crew in action, Cal pacing, Dave spraying and talking to me, Gord with a new water bottle. They did this every mile for 135 miles.
At around mile 110, my left hip started to hurt. 4 weeks prior to the race my left hip started to hurt and there was significant swelling in the area. My doctor quickly scheduled me for an MRI. From his best judgment of the MRI he determined that my I.T. Band was torn vertically – the race was over. You have no idea how devastating this news was to me. I had so much invested in this race too include all those who had donated to my charity www.dsfoundation.org. I knew that I had to run no matter what, but I would be risking tearing my I.T.B. further.
My doctor wasn’t 100% positive on his diagnosis so he personally took it upon himself to set up an appointment for me with another specialist. The other doctor determined that it wasn’t a tear, but was a fluid pocket developing on my hip. We discussed the situation and with two weeks from the race we agreed upon a cortisone shot to see if it would at least reduce the inflammation, however the odds of me being able to run at Badwater were dwindling. (By the way this was all happening while studying for my Chinese final exam – fun times).
The cortisone shot did reduce the swelling, but the fluid pocket remained and was of serious concern to me and now at mile 110 it was starting to cause irritation. My biggest concern was my hip would ‘go out’ or the inflammation would throw off my stride and reduce me to a crawl the rest of the way to the finish. Thankfully neither happened, but it did mean I had another area of pain to deal with the rest of the race.
We finally came into the outer limits of Lone Pine, but even then you still have over one miserable mile before you hit the Lone Pine checkpoint. At the Lone Pine check point I went in my 4th and final ice bath. I was feeling wore out from the run to LP and I wanted to bring my core temp down before I made the final push up to Whitney Portal. While in the bath I was interviewed by the webcast guy and got to say hello to my children - Nathaniel, Shannon and Jonathan. That was awesome. Reaching LP was a significant milestone.

Photo: Lone Pine Checkpoint
Although I still had 4 hours left of climbing, I knew I was going to finish with a good time and place. I could feel my crew was also excited, they were excited about our effort and they knew we were going to be done soon.