The Road to Badwater–Pt 7 Panamint Springs

This is part 7 of a series highlighting an ultra-marathon run by my friend Gregg Geredes.  Gregg came in 5th place and was th 1st rookie to fi

nish!  135 miles: 28:28:29.
This achievement was done to raise money for the Diplomatic Security Foundation.  Click here to find out more.

I was more than happy to finally have a downhill to run down and I took advantage of it. With Mike in tow we blazed down the mountain. After about 4-5 miles Cal switched in as my pacer and we continued our fast decent. Cal was wearing his Garmin and asked if I really wanted to run this section at a 6:15 / mile pace. I said as long as I feel good let’s roll, so we did.

We continued knocking down the miles gradually slowing to a more reasonable pace as we neared Panamint Springs. We were running in the darkness of the desert now. We could see the lights of Panamint Springs all the way down the mountain and it seemed it was so close but took forever to get there. (Note: Because the race is run on the road from the hours of 7:00 p.m. – 6:00 a.m. you need to wear reflective vests and have flashy lights on back and front.)
Panamint Springs to Darwin (72 – 90) Another Climb

We reached Panamint Springs just before midnight and I went back in the ice bath. The temps weren’t that hot, but I was tired and needed to be revived, additionally the fast running had brought my core temp up again. It was now time to start the 2nd climb. This climb wasn’t quite as long as the first, and it wasn’t in the heat of the day, but it was still over 4,000 ft of ascent over the course of 15+ miles. By now all I was drinking was a mixture of Ultra and Coke and eating Pringles whenever I could. My stomach wasn’t bad, but nothing sounded appetizing and eating was a chore. As long as I wasn’t losing energy I could stick with this routine. Besides, the coke gave me extra calories and the caffeine helped. (Note: Experts say that during hard physical exertion you can only absorb about 300 – 400 calories per hour, even though you might be burning up to 1,000 per hour. To make up the difference your body first burns your glycogen reserves, about 2,000 calories, and then needs to turn to burning fat, over 200,000 calories there– enough to run Badwater 10 times.)

During this section Cal did a majority of my pacing. When I picked him up as my pacer I noticed he was acting a little different from the previous section. I found out he had taken it upon himself to keep me motivated at ALL costs and sacrificed his own health and sanity by drinking 2 red bulls. 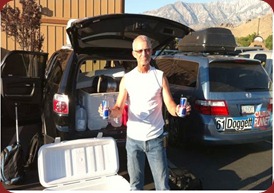 It worked and will go down in history as one of my favorite runs of all-time. I even drank my first of three red bulls during the race so that I could get in the same mind set as Cal. It felt like we were college students as our minds randomly jumped from one topic to the next. As we climbed we came across another runner, whose pacer was carrying a radio. I commented on the music and before I knew it my pacer was singing to me, and then we were both singing.
Around mile 75 - 80 we caught the last of the 6:00 a.m. wave, Dan Jensen a 61-year old Vietnam veteran amputee, who was absolutely crushing the course this year. He ended up with a time of 36:14 his fastest time to date, 6 hours faster than his previous PR. Absolutely amazing.

The last 10 miles to Darwin are on curvy roads. My goal was to reach Darwin before dawn and due to my crews efforts we were way ahead of schedule. Mike and Cal kept me moving as I ran/walked this section and watched for falling stars. I saw a total of 9 falling stars during the course of the night.
This night section was actually quite amazing. The night air was cool, my energy was still up and so was my crew. My pacers kept me going and my crew kept cheering me on. I can specifically remember Janet and Nanc’s excitement, as they were more involved during this section. Their cheering and comments kept things lively during the night. Everyone was buzzing with excitement.