The Road to Badwater Part 2

The Day Before the race

Before we left the city of Pahrump we picked up a few more groceries and our last Starbucks Frappacino. (Note for would be travelers: If making the trek from LV, this is the closest Starbucks to Death Valley.)

Photo: The last Starbucks
We arrived in Furnace Creek and were welcomed by an intensely bright sun and exhausting Death Valley heat. I mean it was REALLY hot. We checked into the Furnace Creek Ranch and soon found out that the hotel ice machines were broken and so we would be paying $3.50 per bag of ice – how convenient. And believe me, we went through a lot of ice. The hotel was nice, has a good restaurant, general store, and even a golf course – Yes, a golf course in Death Valley. I didn’t get to play a round (this time), but I highly recommend the ranch if you ever find yourself in Death Valley.
I’m not sure what the temperatures were that day, but as I said it was REALLY hot. As we waited for the pre-race briefing we were all feeling the heat so it was nice when the doors finally opened for the pre-race brief. The pre-race brief is quite an ordeal as they acknowledge all the volunteers, the runners as well as lay out the race rules. As you look around the room you see all these people and their crews, (most crews were between 4-6 people) who are making this huge sacrifice to be there in Death Valley to challenge themselves, it is quite inspiring.

After the pre-race brief, we enjoyed a pre-race dinner at the FC Ranch. I announced that I believe everything happens for a reason and that each of my crew members were on my team for a reason and I was blessed to have each one of them with me, I also announced that I was making Dave Strauss my Crew Chief. You need to have one-voice if . . . when things go bad. Dave had already crewed me in the Viaduct Trail 100 miler last year and we had run the Oil Creek 100 miler together. He had the most experience on the crew on what a pain I can become during these events.

After dinner we all wanted to check out the infamous BADWATER. We all packed in the Van and drove the 17 miles to Badwater. Along the way we realized that we had no water in the Van with us. Now in any normal situation I wouldn’t care about not having water in my vehicle, but with as intense as the heat was I was hoping we didn’t have any vehicle issues. Badwater is an amazing location, it humbles you when you realize that if you were left here and had to make it back to any form of civilization, 17 miles away, you would surely die. For those who don’t know, Badwater is the lowest, hottest, driest place in the Western Hemisphere and the 2nd hottest location in the world. Word has it that Charles Manson came there to find a doorway to Hell. Believe me, you need water.

We spent about one hour walking around the area, taking photos and taking in the beauty of the area. Death Valley is mind blowing, the question that came to my mind is why did God create such a desolate place, but yet make it so breathe-takingly beautiful.

By the time we left we were all feeling the intense heat and were drying out, (I even allowed Dave to run the air conditioner on the drive back). We returned to the hotel and everyone drank at least 2 bottles of water/Gatorade trying to recover from our 1 hour Badwater experience, and then we drank even more in preparation for tomorrows adventure. 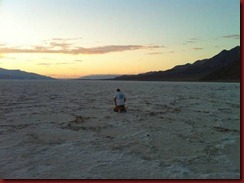 That night I debriefed the team one more time on all my supplies, which I had set up in clear bins and then I gave them my ‘penciled-in’ race strategy, knowing that the heat could ruin all strategies. When I run 100-mile races I usually have 3 goals, bronze, sliver and gold. For this race my bronze goal was to just finish, and I figured I could do that in 36 hours. My silver goal was to finish in under 33 hours which would mean I would need to average better than 4 miles an hour, a little more challenging especially for a rookie. My Gold goal, which I admit I rarely tell anyone, was to finish in less than 30 hours and in the top 10, not very probable unless everything came together.