The Road to Badwater Part 1

Today I would like to share a journey with you, one that, if you are like me, you may find inspirational as well as full of surprising insight.

Gregg Geerdes is a former member of Connections.  Along with his wife Janet, he is living in California preparing to go overseas in service to our country.  This is his story.....


The Road to Badwater
by Gregg Gerdes

I can’t give you a definitive answer as to when I started on this path. Was it when I first applied to the 2009 race while in Baghdad? Was it after I ran my first ultramarathon in 1997? Was it when I began running early in the morning while in grade school? Or maybe have I always been on this path and just now become aware of it? I don’t know. What I do know is, now that the race is over, Badwater was an amazing memorable section of road along a much longer road, a section of road through the desert that I will remember for as long as my memory serves me well. Here is my story. 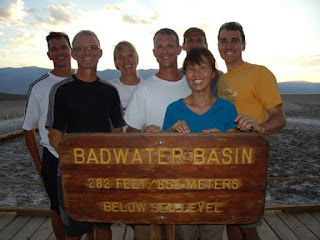 In 2009 I had received my orders to Taiwan. You might say that preparing to move to another country is enough to keep a family busy; between selling our home, learning Chinese, and saying our goodbyes to so many amazing friends, we didn’t have much time for additional pleasures, yet alone challenges of a lifetime. However, on February 18, I was accepted into the 2010 Badwater Ultra marathon, a 135-mile race through Death Valley, considered by many to be the world’s toughest foot race. How can you say ‘no’?


After moving out of our home on June 15th and then spending 3 weeks living in various hotels, a timeshare, and a friend’s home, on July 2nd we departed Northern Virginia for Tucson, AZ via Los Angeles. The State Department, my employer, wouldn’t fly us directly into Tucson so we would have to drive the 500 miles from LA back to Tucson. I had told my situation to Brandon, a good friend who also was my roommate in Baghdad. Brandon now works in L.A. He not only offered up his Ford F150, but also met us at LAX with keys in hand. 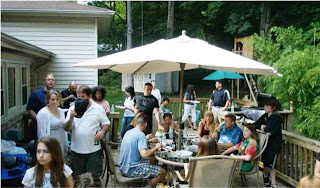 Photo: Final Algonquin Ct. BBQ
We packed up our 10 bags of clothes, my running gear and everything else we needed since our pack out, filling the truck bed and thus preceded to make our drive across the Mohave Desert. Along the way temps reached 110 degrees. To us Virginian’s it felt like an oven, but I would learn soon enough that it wouldn’t be the hottest temperatures I would experience.

We arrived in Tucson that night and spent the next week relaxing at Grandpa and Grandma’s while I bought supplies, went for easy training runs in the heat of the day, and generally tried to acclimatize to the 100+ temps. In my training back in Virginia I had acclimatized myself by wearing extra clothes on my runs and spending time in 195-degree saunas, however I knew I still needed a week under a hot sun.
On Thursday, July 8th, Janet and I left the kids with Grandpa, Grandma and Auntie Jean and drove to Las Vegas, stopping for one night in Laughlin, NV. Laughlin is a small casino town on the AZ-NV border. The hotel room only cost $30, and it was a comfortable room. Not much to do in Laughlin unless you like to gamble, although Janet and I found an awesome Sushi restaurant there, which we highly recommend.
The next day we finished our drive to Vegas. Our accommodations in LV were excellent. Back in February, Janet my accountant, logistics manager, and #1 cheerleader had traded-in our one-bedroom unit timeshare for a two-bedroom unit timeshare at the Desert Paradise Resort. It was excellent resort and would serve us well both before and after the race.
After arriving we picked up our rental car. I had wanted a full size van for the race, but the cost for one week was outrageous so we settled for a mini-van. Just before we picked up the mini-van Janet prayed that we would get a white mini-van, to protect us from the sun. Not only was the mini-van white, but also the license plate was 135-ABC (can’t remember the letters). It brought us a good laugh.
That night Janet and I went to dinner at Chipotle’s and met a recent friend of mind Keith, who just happened to be in LV that weekend. Keith had crewed at Badwater 3 times and had given me his personal insight into the race. Keith through his connections had also gotten my team Injinji Safari Hats, which were perfect for the race.
On Saturday the crew began to arrive. Mike Densley flew in from Virginia; Cal and Nanc drove in from Tucson; Dave Strauss had the most trouble as his flight from Virginia kept on getting delayed. This however turned out to be a blessing, since our wonderful white ‘135’ mini-van was having mechanical problems. When Janet and Nanc picked up Dave at the airport they brought the vehicle back to Budget, who didn’t have another mini-van in stock so they gave us a 15-passanger van and added Dave as a driver at no cost - Totally awesome. (Note: My final Team member Gord wouldn’t meet us until Sunday in Furnace Creek)
Coming up: The Day Before the Race
Posted by Jim Snowden at 8:02 AM